The Red Bull X-Fighters World Tour is going into round number two and for the first time to Greece. Attached the official press release, find the release in your language in the Red Bull X-Fighters Newsroom. And here is the link for the event-trailer: http://www.redbullxfighters.com/en_INT/video/epic-championship-battle-continues-athens.

The track: riding on a new level

We expect a new level of riding, in fact we expect three levels of riding because the tracklayout in the stunning Dionyssos Marble quarry in Athens will have exactly that. Take an exclusive preview at the gigantic track by watching the track animation clip: http://www.redbullxfighters.com/en_INT/video/exclusive-preview-gigantic-quarry-track . As always you can download it as well at the Red Bull X-Fighters Newsroom.

The 8 former champions are ready

We are very happy to have eight former Red Bull X-Fighters winners in the lineup to battle it out in Athens. Clinton Moore is relaxed after his premiere win at the season kick-off in Mexico City and will spent a few days practicing on australian home turf before he heads to Europe. „The pressure is not on me, it is on the others. I have delivered and it is their need to catch up“, he said. Levi Sherwood has worked not only on his own performance, but also started to reduce weight on his KTM. A set of titanium flip levers reduced the weight on the handlebar by a couple hundred Gramms and makes the bike more flickable. Tom Pagès is said to have another new trick off the quarterpipes in his pockets, we can only wait and see what it might be. Reigning Red Bull X-Fighters World Tour champion Josh Sheehan is back in the series after sitting out the first round. But he has proven last year that he is able to make very good use of the scratch result that every riders has and is focused to be on top again. He has written history lately by succesfully landing the first ever Triple Backflip on a motorcycle. But also the rest of the riders have sharpened their program to fight for a spot on the podium. Frenchmen Remi Bizouard and David Rinaldo as well as Australias Rob Adelberg have added body varials into their routine lately and Spaniard Dany Torres is always a threat. And never count out Taka Higashino, Adam Jones or Javier Villegas.

90 minutes from Quarter Finals on

Please note that the broadcast is geo-blocked in the USA, but will be shown exclusively on Fox Sports 1.

We will constantly fill the www.redbullxfightersnewsroom.com now with plenty of media content fr you to use, these are the highlights in the next days:

Levi Renz Succefully lands a backflip with his RZR in ID 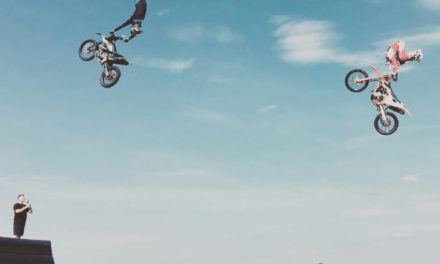 Freestylemx.com Tour at the ECSC in VA Beach