You can find all videos, photos and press releases in your language in the Red Bull X-Fighters Newsroom or just share the content from our social media channels (see below a list of links).

If you have missed the action, you can watch the Live Replay on www.redbullxfighters.com or Red Bull TV. Red Bull TV is available on connected TVs, gaming consoles, mobile devices and more. For a full list of supported devices visit http://about.redbull.tv/

1. Clinton Moore is the man to beat this year. He is keeping his nerves together and constantly delivered runs with the most difficult tricks, even premiering the Volt-to-Nohand-Lander in the finals. „I had a lot of pressure and my run was gnarly, but the other guys had a lot more pressure on themselves. I knew what I can do and it paid off. But to take my second win is unbelievable. Honestly, coming here with Josh Sheehan being back and Tom Pagès bringing his new trick, I would have been happy with a podium. My gameplan will not change for Madrid:  to stay focused and not put pressure on me.“

2. Tom Pagès set the world on fire by not only stomping the first ever Alley-Oop Flair in a competition, but also adding the Bike Flip, a Flair off a dirt takeoff, a Special Flip and more insane tricks into one single run. A crash in the final on his first jump kept him from the win, even though he continued his run. „It was a difficult event after my two crashes on the Alley-Oop Flair in the qualification and I was not sure if I can land it. But today went really good, but then I made a mistake on the Bike Flip in the finals. Actually I wanted to show even more new tricks, but will bring them to Madrid hopefully.“

3. Rob Adelberg celebrated his return to the tour with a podium spot, backing up his third place from the qualification. „I came here confident and fit and brought my California Roll, that I was working on. I am blown away that I got third with such a high level of riding going on tonight. I am working on a new trick, I have a month until Madrid now, so I will knuckle down, work on it and hopefully we will see me stomping it in Madrid!“

4. David Rinaldo impressed with very technical tricks like the California Roll, Volt, Doublegrab Flip, Onehand Takeoff to Indy Seatgrab Flip and a big variety while always being in control. „It was a bit stressful for me, because I wanted to show my new tricks. Now I am proud of myself and pretty happy, this is my best result so far at Red Bull X-Fighters.“

5. Josh Sheehan showed a quarterfinal run that would probably have beaten anyone anywhere, anyone but Tom Pagès with his crazy and innovative trick arsenal. So the reigning world tour champion and winner of the Athens qualification had to pack his bags after the quarters. „I was very happy with my run and did it the best I could do it. The qualification was a funny situation and I was wondering if I should aim for the number one spot or settle with less. Now I can say it would have been better to hold back a bit so I would not meet Tom so early. The level of riding is so high, I will continue to work harder and bring some more new stuff.“

6. Dany Torres had a close battle against Rob Adelberg, barely missing to advance into the semi finals. „This week was amazing and it was very special to ride in this special place. I just did a little mistake, but was happy with my run. Now it is time to spend time in my foampit at home to bring a new trick for Madrid.“

7. Adam Jones was unhappy after losing the quarter final against Rob Adelberg. „I am happy about my run and felt great, probably the best I could have done. Me and Rob were close and Rob had a good run, I have a lot of respect for him but I think I should have won that. I am a little upset about the judging, but what can I do?“

8. Levi Sherwood had a difficult quarterfinal against later winner Clinton Moore due to his bad luck in the qualification and had to call it a night early on. He showed the Superman Egg Roll as his newest trick. „I had a hard time in the qualifiers yesterday but went out and did what I wanted, Clinton just got the better end of me. The riding level here was huge! I am disappointed that I did not advance to the next round, but that’s it.“

9. Rémi Bizouard just missed advancing to the quarter finals by 0.2 points. „I learned a lot this week. It was hard for me to find the right line and I could not show all my tricks, but I only can blame that on me. I was close to advance to the next round, but Tom did amazing tricks while I felt I was riding on a basic level, so it is okay that he went on. I am looking forward to the next event already.“

10. Javier Villegas entered the main competition in spite of a hard crash in the qualification. „It could have been worse. I am disappointed that I did not make it to the quarter finals, but I am happy that I am not injured badly. This just motivates me to practice some more.“

11. Nick Franklin filled in for the injured Maikel Melero and received the invitation just a few days before the event. „I just had one day of practice after I got the invitation. I am super happy that I got invited and the Red Bull X-Fighters see me on a level that I am good enough to come here. I am happy with my run and did myself pride.“

12. Chris Meyer put his name on the landscape with an energetic and spectacular run after getting the invite on tuesday evening replacing the injured Taka Higashino. „I am really happy about the invitation and my riding, but not happy about the judging. I hope I can also go to Red Bull X-Fighters in Madrid and do much better.“

The third event will take place on July 10th in Madrid, Spain.

Levi Renz Succefully lands a backflip with his RZR in ID 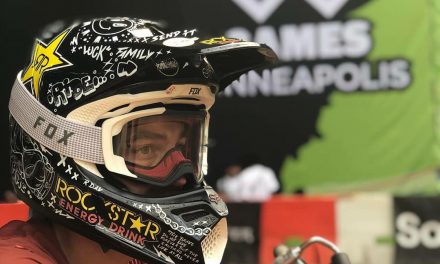