We are happy to fill you in with some insider-news after the qualification at the third stop of the Red Bull X-Fighters World Tour in Madrid, Spain.

A new track for the best tricks

For the first time ever the track crew built two massive landings for the record number of nine take-off ramps within a bullring to be ready for the newest and craziest tricks. This was only possible by using 56 tons of metal scaffolding as underconstruction for the landings. Twelve of the best riders in the world, including eight former Red Bull X-Fighters event winners, battled out the start order for fridays main event in the qualification, bringing Freestyle Motocross to another level once more.

Madrid is known for to be a very good place for the biggest tricks out there and FMX-history being written not only once. The qualification gave a very nice taste of what to expect when Tom Pagès rode himself into the number one qualification spot with a run that probably might have beaten his amazing quarter finals run from the last event in Athens. The frenchman started with a huge Holygrab before he stomped the Alley Oop Flair over one of the three quarterpipes. A flatspin 360 followed before Pagès landed his stunning signature Special Flip, then a Volt, the trick he did not include in Athens. But that was not enough, he landed the Bikeflip before finishing off his run with an Indy Flatliner… and this was only qualification!

But pretty much all of the riders stepped up their game by adding new tricks into their routine. Levi Sherwood added the Flair for the first time into one of his run, which is not only helping his trick level, but also his use of course scores, landing in second place.

Clinton Moore played his „safe card“ – as he is calling his riding level – once more, but stepped it up in his second qualification run including the Bundy to his full bag of tricks, finishing in third position. By moving up one spot after the first run he avoided a head-to-head duell in the quarter finals with his countryman Josh Sheehan, who crashed, but got up to his feet afterwards, on a doubleflip, when he came a bit short, leaving him in fifth place. In between the two australians David Rinaldo finished in fourth by adding the Egg Roll transfer flip to his run of impressive banger tricks like the Doublegrab Hartattack Flip, Volt and California Roll body varials and combo tricks as Airplane to Helicopter. The frenchman is definitely a thread for the podium in the main event!

Adam Jones and Taka Higashino both avoided any fancy tricks off the quarter pipes and focused on very well executed clean runs over the regular ramps with a high trick level, including Doublegrab Flips, Rock Solid Flips and other technical stuff, showing that you still can move directly into the quarter finals without touching the quarter pipes.

Maikel Melero gave a strong comeback ride after his injury, but has to go into the first round as well as Rob Adelberg and Javier Villegas. They will get joined by Remi Bizouard, who included the Egg Roll as well, but crashed on a Volt later in his first run and sat out his second run after that. Local hero Dany Torres decided to not start at all to rest his body after he crashed twice attempting to land the Flair in the track testing session. But the spaniard is very likely to start in tomorrows competition.

The main event is sold out, so 23,000 spectators in the Plaza de Toros de Las Ventas in Madrid will witness an epic battle for the win. But no worries, everybody can watch it LIVE on redbullxfighters.com, Red Bull TV and TV stations around the world.

And here is a special treat for our hard-core FMX fans: See all the runs from 1st round exclusive on redbullxfighters.com at 10:00 pm CET.

Remember: The exclusive 1st round coverage on www.redbullxfighters.com starts half an hour earlier.

Please note that the broadcast is geo-blocked in the USA, but will be shown exclusively on Fox Sports 1 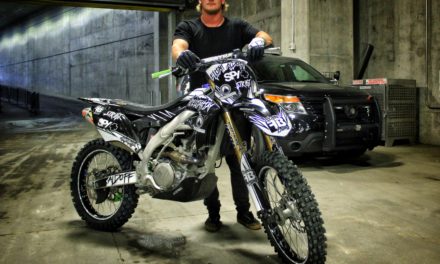