Without training to victory – Rinaldo stuns the competition Two huge days of competitions in Poland ended on Saturday in spectacular fashion at the NIGHT of the JUMPs World Championships, especially with the return of David Rinaldo who was dealt a cruel blow of being stranded at home the previous day, following airline pilot’s strikes. The 2013 World Champion got off to a cold start after arriving only one hour before show-time and missing the official practise, but David was given one test jump per ramp in front of a sold out Krakow Arena before commencing his qualifying run. And what happened next was nothing short of unbelievable. Rinaldo laid down almost all of his huge technical tricks, including one of the biggest Double Hart Attack Flips ever seen. David landed in 4th position and directly into the final, a feat that has never happened before in the history of the FIM Freestyle MX World Championships, with a rider coming into the finals without prior training.

But this was not enough for Rinaldo, and in the final the Frenchman shocked the entire competition as he threw down his California Roll and Double Hart Attack Flip in the run, and finishing his run with a second body varial, the “Volt”. After premiering the Volt for the first time in competition, it also impressed the current Championship leader, Maikel Melero. The reigning World Champion had two major mistakes in his final, and had to be satisfied with a 5th place.

Credit: NIGHT of the JUMPs 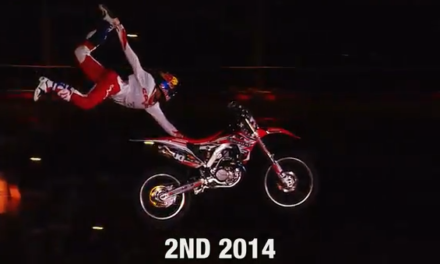