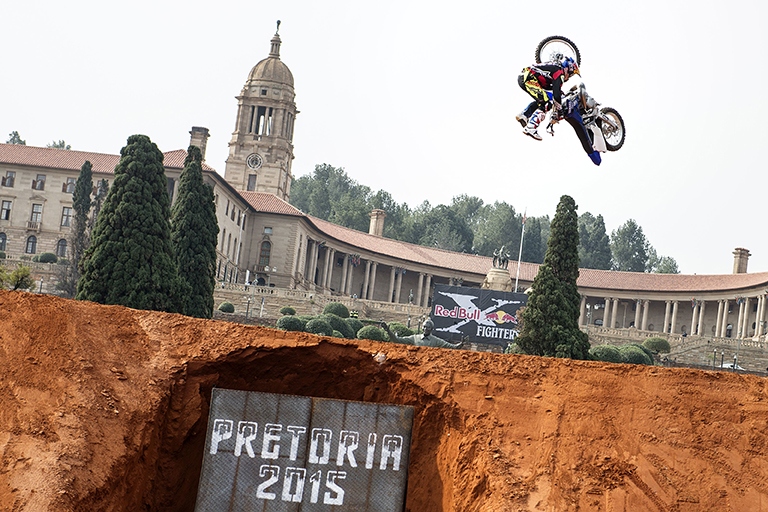 17,000 fans in Pretoria, South Africa witnessed one of the tightest FMX competitions in history with an incredible high level of modern riding. The final saw Tom Pagès and Clinton Moore battling it out with a never before seen intensity of riding. With Pagès winning these two are now tied in points before the final showdown in Abu Dhabi on October 30th.

1. Tom Pagès now has set his focus on winning back the Red Bull X-Fighters World Tour championship and showed no signs of weakness. „Because of a bad crash I suffered before this event I came here with no practice and was not sure what to expect. I knew Clinton and Josh would gonna be good, but did not expect them to be as good as they rode today. Without a very clean run it would not have been possible to go through today. I am happy with myself and my riding. To win here gives me a lot of motivation for the final in Abu Dhabi. I want to go to Abu Dhabi with another new trick, I want to be even better there!“

2. Clinton Moore redeemed himself from a bad qualification by working himself into the finals with more than impressive runs, being the first person in the world to showcase the Volt off a dirt takeoff several times. „I cleaned up my head today, gave it my best and finished in second place. I am happy about that. The level in the final was incredible, things keep going. Now it feels like the season is starting again, being tied in points for the lead before Abu Dhabi. I am hoping I can learn something new for there.“

3. Taka Higashino convinced with a big portion of style and difficult tricks and proved to be a contender for a top position. „I was sick for a week before coming here and was about to cancel my participation in this event. This is why I am super happy about my result. I am also happy that I landed the 540 here. The level is crazy, everybody is risking a lot now!“

4. Josh Sheehan finally is turning his season around barely missing the podium and finals even though he was landing the double backflip. „Everybody was throwing their biggest tricks, unfortunately I had to go up against Tom. But I am happy, I landed my best run I could possibly do and did no major mistakes. The level of riding is insane, it is next level!“

5. Rob Adelberg could not succeed as well as in the qualification, but had a very impressive quarterfinal run against Clinton Moore, which had podium calibre. „It was stiff competition going up against Clinton, I was a little unlucky to go up against him. The result was a little bit closer than what I expected, so I am happy I did my best and pulled all the tricks I wanted. Now I will go home and work on some more for the next one.“

6. David Rinaldo did not make it into the semi finals for the first time this year after two unfamiliar dead sailors in his quarterfinal run and was very disappointed. „This weekend was not good for me. I had a big crash in practice and totally messed up my run today. Definitely not a good event for me, but it is what it is.“

7. Maikel Melero put on a lot of pressure onto Taka Higashino in the quarterfinal, showed new tricks and that he is back to his top level that he had before his injury earlier this year. „I am happy with my riding, even though my front suspension broke before qualification. My mechanic fixed it as good as he could with the conditions given, but it was not 100% perfect. I am very happy that I could do Flairs, Egg Rolls and Body Varials with this, but I could not do my best flip combos. I am looking forward to Abu Dhabi, because I know I can do even better.“

8. Remi Bizouard worked his way through the first round into the quarter finals by showing his big extensions and the Volt as joker trick, the trick that knocked him out of competition in Madrid. „I am really happy about what I did here. It was a tough week, I had a crash on friday in practice, but I turned it around and really enjoyed my last few runs here and the amazing crowd.“

9. Adam Jones missed to advance into the quarter finals by only 0.1 points, even though he threw a massive Doublegrab Backflip to start his run with. „I had a little mistake in my run today after I got a little kick at the takeoff that I was not expecting and that threw me off right at the bat. But sometimes you need to get beat to get hungry again.“

10. Javier Villegas rode without mistakes and with good extensions, but did not make it through the first round. „I am happy with my riding, but the level is pretty damn high right now. I hope to get some time access to the foampit to work on new tricks.“

11. Alastair Sayer showed very technical tricks in his qualification, but suffered from crashes. In the first round he impressed by flipping the massive dirt jump. „This week I had all sorts of ups and downs of competitive Freestyle. Unfortunately I made a few mistakes today, but the whole week was awesome and I am thankful that I got a chance to come out here and accomplish my personal goals, which I am stoked about.“

12. Dany Torres decided to not start in the main competition sustaining a patellar contusion from his crash in the qualification.

The World’s First Triple Backflip On A Motocross Bike